A transition is the link between the end of one state and the beginning of another, creating forward (and backward) paths within a workflow. Transitions allow configuration of who the state will be assigned to, the correspondence that they will receive, along with some finer look-and-feel elements of the workflow.

Transitions display as as a connecting line, beginning with a circle from the outbound (from) state, and terminating with an arrow at the inbound (to) state. The line's appearance can vary depending on the type of transition, as follows:

There are several ways to add Transitions:

Option 1: On the workflow canvas, drag a transition between two states.

If your target state is within a Parallel section, you can drag to the Parallel and the Create Transition dialog will display allowing you to select or create a state within that Parallel section.

Option 2: Drag and drop a Transition from the left panel.

To complete this method, click and drag the Transition block from the left panel and drag onto the source/starting state. The Create Transition dialog will display allowing you to select a destination state to complete the transition creation.

Option 3: Add a Transition from the Transitions tab of the source state.

Click to select the source/starting state for the transition, then click the Transitions tab. Under the Outbound section, click Add to reveal the Add Transition panel. Provide an optional name, and select the destination state, then click Create.

The new transition will be automatically selected to allow you to configure its properties in the Inspector panel.

Approved/Rejected transitions will appear with a green/red dot respectively.

This section defines who the next state will be assigned to.

Send to Type only applies to user and group assignments and defines how the specific recipient should be selected.

Allows an in-progress workflow to be reassigned. When selected, select who will be given reassign rights:

The Creator and Previous Assignee user types can reassign from Produce > Form Activity for a workflow that they have are a part of.

Defines whether to send a notification email to alert the recipient that a workflow has been transitioned to them.

The Email Subject and Email Body have defaults that are the same as what currently gets sent for transitions. It also supports Question References as well as some keyword references. Here are some examples:

Allows the designer to specify on which particular page the form will be loaded, often used for skipping content that is generally not relevant because it has been completed by another user, while still allowing the user to navigate back to said content. 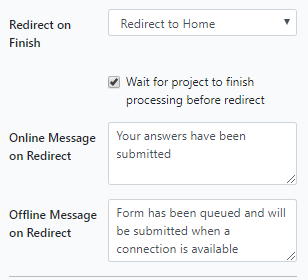 Allows the designer to specify documents to be available to be downloaded when the transition is triggered.

The document is only required to be selected here if the user will download it. Actions requiring the document to be generated are specified on the Action Documents tab of the Action itself.

In some cases, a state may have multiple transitions to other states. For example, if the workflow is an approval process and the workflow is approved, it will go to one state. If the approver doesn't approve, it may go to another state. This can be defined within the transition conditions.

Transition conditions work the same as all other conditions within SmartIQ. However, the only available condition type is Answer Value.

Actions can be added to transitions in a workflow by dragging an action from the left panel to the transition. 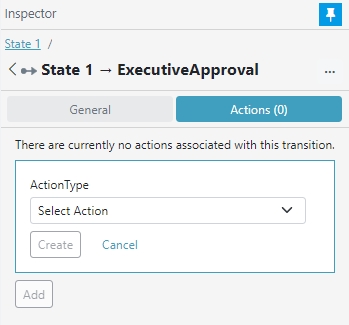 When a workflow transitions between states, a number of operations are performed in order. These operations are separated into stages to allow for control over the ordering of Actions which are associated with the state.

The sequence of a workflow transition is as follows:

See the Actions Overview page for details of how to set an Action to run at a specific stage of the workflow generation.

Updated about 2 months ago